Stumbling upon the sources of story

I love to walk, and lots of ideas for new stories and snippets for stories I am working on come to me when I am out and about. This is not unusual. Many, many writers find that walking has this effect.


Recently I had the reverse experience.
While out walking, I stumbled across this dark thicket of tree ferns.


The track I was walking on is called the Lynch Stream track and it runs from the ridge of a hill on the East coast of the Coromandel (near Sailor’s Grave) down, down, down to Otara Bay. All the way you are crossing and re-crossing the Lynch Stream, which is great fun, then about halfway down you come to these ferns. 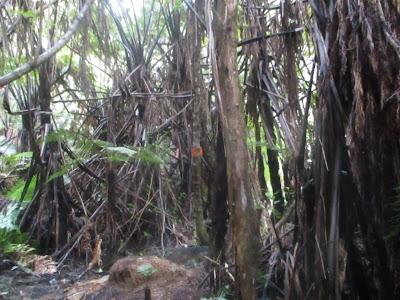 Now I have walked this track several times, but this time I pulled up short and thought ‘Ah-ha. Of course!’


You see, in my children’s novel, The Bold Ship Phenomenal, my protagonist (Malachi – the hero of the story) hides in a dark thicket just like this in Chapter 32, when he’s running away from some baddies (called the Jarrods).

Malachi leapt, dodged, scaled, sidestepped, burrowed and crashed. Vines whipped his shins and roots trapped his toes. Twice he stumbled, the second time jarring his right wrist so badly that he cried out with pain. Yet he couldn’t shake off the Jarrods, and the sound of their crashing and swearing followed him, like a bad-natured echo, through the bush.


He was almost too tired to carry on when he spotted another path. Gratefully, he took it, following its narrow passage until he reached a thick stand of ponga.


The tree ferns’ inky trunks made a pool of darker shadow within the dim undergrowth. Malachi veered off into them, heading for the gloomy heart of the stand where the shadows looked almost black. But when he reached it, he found the blackness wasn’t shadows, it was a cave.


The cave was tucked under a low hillock and had a wide shallow mouth. Dead ponga logs and fronds were piled around it. Almost, thought Malachi, as if someone had tried to disguise the entrance. He dropped to his knees and crawled inside, inching into the darkness until he was sure he couldn’t be seen from outside.


Although I didn’t realise it when I wrote it, this must be where my fictional stand of tree ferns came from. 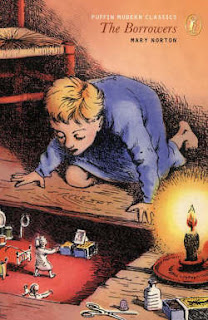 I had a similar experience a couple of weeks’ later when reading one of my own childhood favourites – The Borrowers, by Mary Norton – to my son.

For those of you who don’t know the story, the Borrowers are a race of tiny people who live in the floors, walls, crooks and crannies of houses, and make their living by ‘borrowing’ from the houses’ larger occupants.

Naturally, they have to remain hidden, and the family of Borrowers that the story is about (the Clocks) have the main entrance to their under-floor home concealed under a large grandfather clock.


When I read the story to my son, I had another ‘Ah-ha’ moment.
In my other children’s novel, Ella and Ob, I also have a clock, and as soon as I re-read about the Borrower’s clock, I realised I had ‘borrowed’ it for my own story.
Here’s Jenny Cooper’s fabulous picture of my clock on the cover of the book. 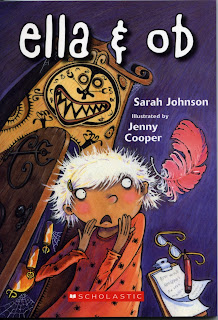 And here it is being walked into (by a ghost) in Chapter One.


But this was no ordinary bump. This was the kind of bump that, if you were awake and alone in the house, would make you jump, and yell, “Who’s there?” Bella had been asleep, but this bump made her sit bolt upright in her bed, and stare around the dark room. Because this bump sounded like someone had walked into the grandmother clock.

Bella’s father had shifted the clock from the lounge that morning, as he could no longer bear to be reminded of time passing. It now stood in the hall outside Bella’s bedroom door.

There was another bump and this time Bella jumped right out of bed. “Who’s there?’ she whispered into the darkness.

The clock’s springs pinged and its pendulums knocked softly against its wooden sides. Bella grabbed her torch and tiptoed towards her bedroom door. She eased it open.

“Curses,” grumbled a quiet voice. “Who put that there?”

Bella peered through the crack she had made, but all she could see was the stretched and skewed shadows that always accumulated in the hall at night.

“I mean to say, what a stupid place to put a clock!” the voice continued. “Now I’ve gone and messed up my feathers.”


That’s how stories work (at least for me). Little bits and pieces – from places you’ve been, things you’ve read, things you’ve heard about or thought about or seen – join together in your head until you have a spark of a story. At first it’s usually just a tiny spark, but once it’s ignited other bits join it, and it gets bigger and bigger until it’s ready to be written.
And all this often happens while you’re out walking!
Posted by Unknown at 17:30 No comments: